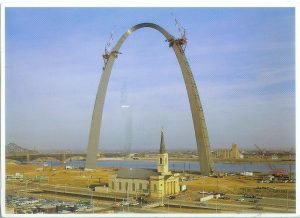 The final section of the St. Louis Gateway Arch was set in place 50 years ago on October 28th, 1965.  This was a momentous moment in the History of the Gateway Arch and it’s Engineering Accomplishments.  There were so many factors that needed to be perfect for that final piece to fit seamlessly in place.  All of the work on the two legs had to be precise so they would meet 630 feet at the top.  The Arch’s surface temperature had to be just right so the completed sections had not shrunk or expanded.  And of course the weather had to cooperate so that final piece could be raised to the top, lowered in to place and secured to complete the Arch almost four years after construction began on its foundations.

On Wednesday October 28th you can meet those who constructed the Arch at the Missouri History Museum from 9:00AM to 10:30AM.  There will be a Birthday Party in front of the Old Courthouse at 11:00AM followed with $1 Tram Rides to the top of the Arch all day, cup cakes from Sarah’s Cake Stop and Destination Desserts from 11:30AM to 1:30PM and Commemorative Merchandise for sale.

The Arch opened to the public with Tram Rides to the Observation Deck two years later in 1967.  Over the next few years the Museum of Westward Expansion, a Theater and the Grounds of the Jefferson National Expansion Memorial were completed.  Other improvements were made to the Monument Grounds over the following decades including the ongoing construction today to improve and preserve the History and Significance of the Gateway Arch.

I enjoy having the opportunity to drive for people from all over the country and all over the world.  The typical response to personally seeing the Arch is the amazement at it’s size.  At 630 feet tall the Gateway Arch is the Tallest man-made National Monument.  This is usually followed by learning you can actually ride inside the Arch to an Observation Deck at the top that can accommodate 160 people.  The belief is you ride in an Elevator, but in fact it is a Tram.  The difference is an elevator is a passenger compartment that travels vertically usually lifted and lowered by cables.  The passenger compartments in the Arch are on a track and continually level themselves as they climb the interior of the curved Arch Legs.

The following question is always; “What’s the Arch for?”

The St. Louis Gateway Arch is the result of a design competition held by civic leaders in 1947 to revive the Downtown Riverfront and also serve as a Historic Marker for St. Louis’ role as the Gateway to the West.  The Riverfront was lined with many century old warehouses and buildings that were no longer in use and desperately needed to be removed.  The winning design chosen by leaders was an Arch surrounded by a large park submitted by Architect Eero Saarinen.

The Arch was also to be part of a larger Memorial to Thomas Jefferson and his role in the acquisition, exploration and expansion of the United States west of the Mississippi River.  The City of St. Louis was a vital part in outfitting and supplying the explorers and settlers who ventured into the Louisiana Territory and lands west of the River.  Today the Jefferson National Expansion Memorial inlcudes the Gateway Arch and Park, the Old Courthouse and Luther Ely Smith Square. 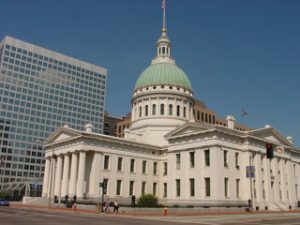 GEM Transportation specializes in providing Transportation for St. Louis Tours to locations like the Gateway Arch, Forest Park and sites in and around St. Louis.  CALL or EMAIL our Reservations or Transportation Specialists for more information on Group Tours of any size today. 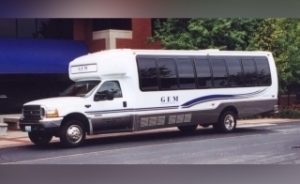 One of GEM Transportation’s 27 Passenger Mini-Coaches